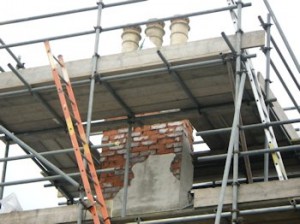 With Christmas just round the corner, families will soon find themselves searching for turkeys, fixing broken fairy lights and using endless amounts of sellotape to wrap an endless number of gifts.

But does anyone stop and spare a thought for Santa Claus?

As we are all aware, it has become tradition that Santa Claus squeezes himself down chimneys around the world to deliver presents. This is, in fact, a lot harder than it sounds. The vast difference in the construction of chimneys throughout British architectural history, presents Mr Claus with several different challenges throughout the UK leg of his journey.

Throughout Norfolk and East Anglia, there are a number of finely constructed chimneys – the main reason for this being the high quality of brick making in these counties from around 1650. A typical example would show a single polygonal shaft supported by a crow step gable, often used to hide the use of thatch that was at that time considered to be a poor man’s material. These chimneys were not known for their girth, which potentially presents an issue should Father Christmas have over-indulged this year. 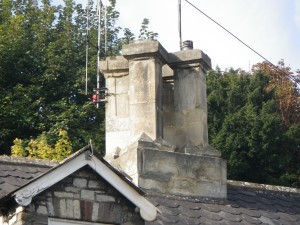 Santa may find himself in a pickle when he arrives at a house with a multiple stack chimney. This design is usually situated dead-centre and is likely to serve all the fireplaces throughout the house, both upstairs and down. Which stack will lead Mr Claus to the correct room to deposit the gifts? He daren’t go down the wrong one in risk of waking anyone up!

A common feature in many early homes and cottages is an external chimney, often added as an afterthought. Cottages with steep thatched roofs require tall chimney stacks that surpass the ridge of the roof as to allow it to draw wind and prevent the fireplace from belching smoke. These tall stacks may provide Santa with a bit of a task when he needs to get back up them. 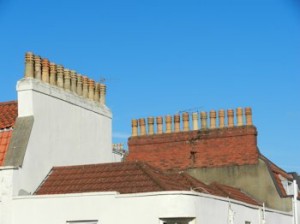 The primary purpose of a chimney is to allow smoke to escape the building and, as it rains an awful lot in the UK, Santa will struggle to find a chimney that does not have a form of defence against this weather form. Cottages in the Lake District, where it is notoriously wet, can be found with a cover over the stack – often made from local slate – protecting them from all forms of precipitation. Even down south, most chimneys are fitted with some form of cowl. How does Santa get around this one? One would assume he carries a tool kit.

This is just a selection of the many chimney types that are present in the UK today and which are bound to cause Santa Claus havoc this year. It also highlights the ever changing construction tastes which make the British housing stock so intricate and diverse.

If you experience structural damage to your chimney (maybe as a result of Santa Claus squeezing down your multiple stack), or if you’re concerned about your chimney in any way, get advice from your Local independent Chartered Surveyor at PropertySurveying.co.uk.