A bitter feud is raging between the residents of Hastings, East Sussex, and the wealthy owner of award-winning Hastings Pier, Sheikh Abid Gulzar.

Following a fire that destroyed much of the structure in 2010, £13 million of funding was received from the Heritage Lottery Fund to help pay for repair work and a local group persuaded the local council to let it acquire the structure through the Hastings Pier Charity. The funding was topped up by the public through crowdfunding a share issue, the first time a registered charity in the UK had issued share capital. The pier was restored and reopened in 2016.

In 2017, a month after receiving the RIBA Stirling Prize for Architecture, the Hastings Pier Charity acknowledged it had failed to raise enough money for the structure to reach self-funding status, and went into administration. At that point Sheikh Abid Gulzar expressed an interest in buying it. He said at the time that: “If someone else buys it I will support them.”

The structure has a history of changing fortune. It was first built in 1872 but fell into disrepair through neglect and after storm damage in the 1990s it was finally closed to the public in 2008.

Mr Gulzar was already the owner of Eastbourne Pier, just along the East Sussex coast, which he had reportedly purchased for £1 million. The residents of Eastbourne were upset when the dome of the pier’s Camera Obscura and forty lions that adorned the original ironwork were painted in gold paint. Mr Gulzar’s love of gold, including his gold-painted Mercedes Benz and extravagent rings, has led locals to dub him ‘Goldfinger’. An investigation by Historic England finally halted further work until Mr Gulzar obtained permission for changes to the Grade II listed structure.

The sale of Hastings Pier to Mr Gulzar caused anger within the community which had crowdfunded nearly £600,000 to top up the fund to renovate it, in the hope that it would remain in the ownership of the community. The sale has been a catalyst for more disagreements ever since, with public insults and accusations in what has become known as the ‘Battle of Hastings Pier’.

Residents accuse Mr Gulzar of making the Victorian structure look ‘cheap’ by adding fibreglass animals along its length and planning to install an amusement arcade. The argument has escalated to social media, including Twitter and Facebook, where one resident said: “The pier was wonderful but … you will be disappointed by what has become of it.”

Towards the end of 2018, Hastings Pier was closed for ‘essential maintenance and improvements’ although Mr Gulzar has been accused of simply trying to save money. A petition on change.org for the pier to open has attracted nearly 2,000 signatures, and another on crowdfunder.co.uk accuses Mr Gulzar of refusing to pay for ‘safety inspections or for new materials to maintain the structural integrity of the Pier’ has reached its target to commence legal proceedings against him.

Mr Gulzar has stood up to the criticism by saying he would not tolerate the use of swear words and that people wanted “everything for free”.

The dispute came to the attention of television’s  The One Show at the end of January, with Mr Gulzar arguing his case with the Friends of Hastings Pier group. Its leader, James Chang, says he is not against change in the area at all – he simply takes issue with how work has been carried out. The group want a “sympathetic development”, said Mr Chang. “What we are asking for is transparency. We want to know the plans for the pier. We need to know that the pier is being well cared for and looked after. There’s £14 million of public money that has been invested.” 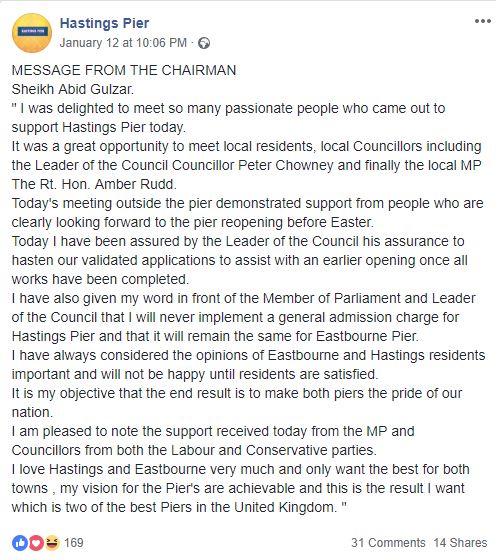 The pier is currently being marketed as the venue for ‘PierJam’ on Saturday 4th May and ‘Garage Nation’ the next day. We’re not sure that a pier is the best venue for a music festival, but it should be of comfort to local people in Hastings that there are at least plans for the pier to reopen.

An independent Chartered Surveyor can carry out a building survey on most types of residential or commercial property, whether an important historical listed pier or a small family home.

Back to February 2019 Newsletter