A gargoyle or grotesque is probably one of the most mysterious building features you will find, but what are they for? We look at the purpose of these building features and the history of their use, and explain the meanings of the many shapes and likenesses.

A Gargoyle is a carved stone character used for drainage purposes to the side of a building.

It is to prevent the rainwater that lands on the roof of a building from flowing down the side walls, so it does not erode the mortar joints or cause water damage to the fabric of the building.

There is usually a channel in its back or through the stone and this directs the flow of water through a specific aperture, normally the gargoyle’s mouth.  The rainwater runs off from the roof and is projected several feet from the walls, thereby protecting the mortar and walls.

The bigger the gargoyle, the further the water is ejected from the side of the building.  A lead pipe was often placed in the gargoyle’s mouth to extend the reach and protect the carving from erosion.

4. Why is it called a Gargoyle?

After the French word for throat “gargouille” which in turn came from the Latin “gurgulio”.  Connected to the French verb gargariser, which means “to gargle”.  In German, the name used translates as “water spitter” or “water vomiter”.

5. When were Gargoyles first used?

6. What are the most famous Gargoyles in the World?

Probably those on the Notre Dame de Paris on the Ile de la Cite, which feature in the “Hunchback of Notre Dame” and have been photographed many thousands of times.

7. Where am I likely to see Gargoyles close by?

Any medieval building is likely to feature gargoyles.  Probably local churches are the most likely place to spot them. 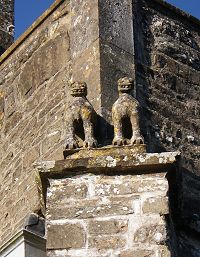 8. What do the figures that are carved mean?

Some figures mean a lot and were used to help ward off evil spirits and such like, and to indicate that within the church you were protected from the evil outside.  At the time of construction of most churches, the majority of the population was illiterate.  Some of the figures were used therefore to provide a permanent visual statement to the parishioners.  Some were purely decorative and on some stately homes they identified the family’s heraldic animals or reputations.

9. Are all Gargoyles animals?

Not necessarily.  Lots of gargoyles are “Chimeras”.  These are carvings of faces which are often distorted into the grotesque and are also often a mixture of animals or mythical animals such as centaurs, harpies, dragons and griffins.  They are often misshapen and distorted faces and creatures, sometimes even human.  It is also understood that on a number of cathedrals there are relatively normal decorative faces used as one of a series of “gargoyle” features that in a few instances are reported to be made by the skilled stone carvers leaving behind them a carving of themselves or close family members for posterity.

10. Why are some Gargoyles called Grotesques? 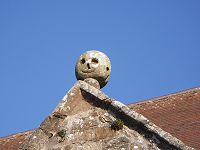 So you now know the difference between a gargoyle and grotesque.